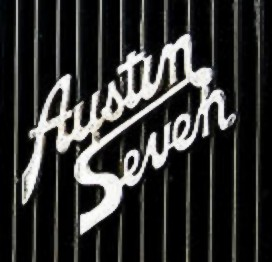 At a time when the Austin Motor Company was in administration and following the introduction of the Horsepower Tax in 1921, Sir Herbert Austin started thinking about the idea of a small car which would be financially attractive to those who could not afford the larger cars that were available at the time. This idea was greeted by considerable opposition from the board of directors and the creditors, and because of this situation Sir Henry decided to significantly fund and pursue the project himself. Having considered the limits of the Horsepower Tax, a small four-cylinder engine with a capacity of 696cc was used producing 7.2 hp.

Following completion of the initial project in 1922 three prototypes were constructed at the Austin Motor Company factory at Longbridge, and the new car was announced to the public in July 1922. As Sir Herbert had put a large amount of his own money into the development of the car, he was to be paid a royalty for every car sold.

In 1923, the first year of production approximately 2500 cars came out of the factory, and in 1939 when production ended the final total number was some 290,000 cars and vans. There were several different body types, some of which took part in racing events.

Several thousand of these innovative little cars which transformed the Austin Motor Company are still with us today.