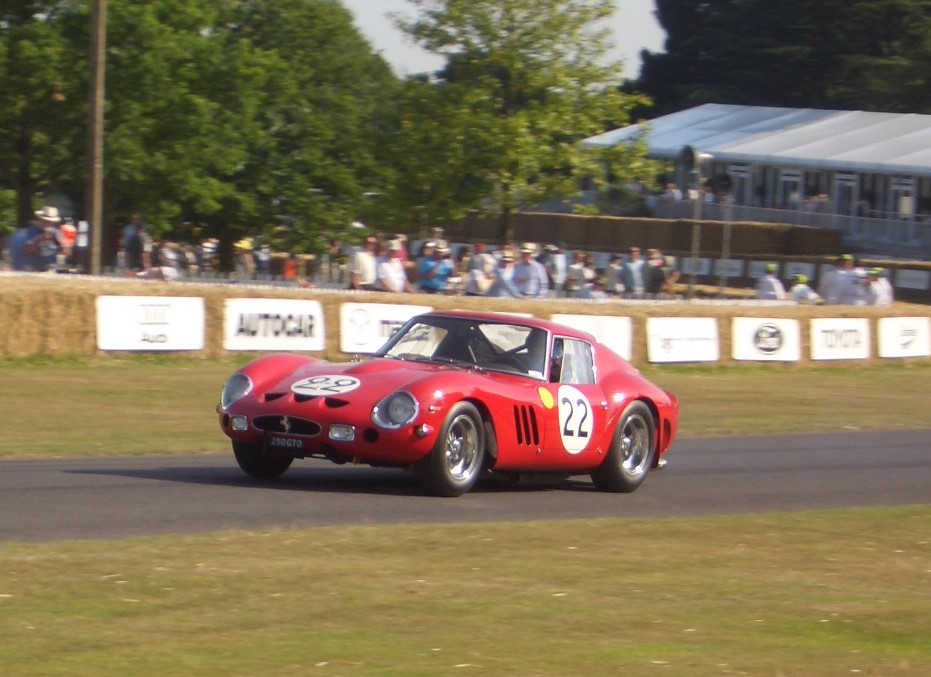 The car, arguably one of the most beautiful designs of all time, was announced in 1962. The stunning outline was highly aerodynamically efficient at the time, and the final original design was developed in the wind tunnel at Pisa University.

Having a somewhat stark interior, the GTO was clearly intended to be used on the track. It was effectively retired from front line racing in 1964 having won the GT Championship three years in a row. However, some carried on racing by private owners for several years, and a few can still be seen by lucky spectators today. Goodwood remains a popular location for this special spectacle.

The GTO has always had a high financial value, and in 2018 a 1963 model sold for an eye-watering $70 million! One famous owner is Nick Mason, the Pink Floyd drummer, who secured his example in 1977, using the proceeds of The Dark Side of the Moon album, for what was then a comparatively modest price. Some ten years later it had appreciated in value to such an extent that he was able to put the car up as a guarantee for the cost of the band’s Momentary Lapse of Reason tour.

The British Motoring Corporation introduced the attractive MGB Roadster as a replacement for the MGA, itself a pleasing design.

It was a typically British, open-top sports car which received much praise when it was unveiled at the London Motor Show. It soon became, and remains, a much loved and affordable ride.

It was quick and provided a smooth and comfortable ride, good enough to rival the popular Triumph TR series, making it a popular choice not only in the UK, but in the United States and the rest of the world.

Further variants were introduced over the years and production continued until 1980. The variants included the MGB, MGC and MGB GT V8, and a total of over half a million cars were sold. The MGB re-entered production after a gap of 12 years with the much-uprated MG RV8. This had  a limited run of some 2,000 cars before being replaced in 1995 by the MGF.

The MG Roadster and its variants are still prized possessions of many owners today, with a wide range of spares and accessories available.

It’s well known that the AC Cobra was a collaboration between American car racer Carol Shelby and the British AC Cars.

Carol Shelby worked with AC Cars, based in Thames Ditton, England, to design and build a high-performance sports car that combined ‘superior European handling’ with American V8 power. The result was of course the remarkable Shelby Cobra.

The car was soon developed further for the track following its introduction in 1962, and it finished seventh at Le Mans the following year with a team managed by Stirling Moss.

The track car was lightweight, nimble, and very quick. and it went on to widely dominate at racetracks. In order to compete in the GT class, the very attractive Daytona Coupe, was developed using an AC Cobra chassis. Not surprisingly this car was also very successful.

A later version of the car produced in 1965 with 500 horsepower, was certified by Guinness World Records as the fastest production car in the world, which it maintained for many years.

It has been said that the AC Cobra is the most copied car in the world and there are numerous cars on the road today, but how many of them are actually original cars? They all certainly look impressive, have phenomenal performance and acceleration, and a wonderful exhaust note. It’s no wonder that they remain a popular choice of those wishing to have fun and make heads turn!

In the early 1960’s Standard-Triumph were experiencing financial difficulties. At the same time the Austin-Healey Sprite was a popular and affordable little sports car, and Standard-Triumph decided to develop their Spitfire to compete with the Sprite. However, the financial position delayed the production of the proposed new car.

Giovanni Michelotti designed the car, and to minimise costs the Spitfire was based on components from the Triumph Herald saloon, which Michelotti also designed. This avoided the costs of having to develop a completely new unit. The easy access bonnet and wing assembly was also retained for the Spitfire.

The company was later taken over by Leyland Motors and the original Spitfire prototype was put into production.

In order to be competitively inexpensive rather basic trim was installed. However, it provided a reasonable level of comfort and instrumentation, and was well received. The Triumph didn’t have a huge amount of power, but being so relatively lightweight and with twin carburettors, a sporty camshaft and a tuned exhaust manifold, the performance was surprisingly good.

The car proved to be very popular, and there was a series of six versions, with approximately 315,000 manufactured over a period of 18 years. The car’s popularity continues today and there are still hundreds on the roads.

The Lotus Elan is regarded by many as one of the top sports cars of the 1960’s, and became a commercial success that considerably enhanced Lotus’ financial circumstances going forward.

The Elan car adopted Colin Chapman’s minimum weight philosophy and was technologically advanced, with exceptional steering. It was widely admired for its outstanding performance and handling, and although it was not originally designed with racing in mind was regarded by drivers as providing the closest thing on the road to a race driving experience. It’s not therefore surprising that it did find its way onto the tracks, despite its initial inherent unsuitability. Having realised that so many customers were in fact racing the cars Lotus decided to put in some proper race development for the car.

There are still perhaps several hundreds of these Elans still in around today and are considered a valued collector’s car.